How we throw down in Norfolk 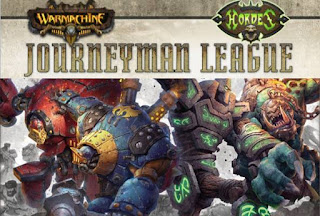 Hey there, as I said in my last post I have a Journeyman League that I am running for my local LGS starting tomorrow. I thought I would share some of my thoughts about the current Journeyman League system put out by Privateer Press and how we have edited it to make it work better in our meta.

Our league is based on the 2017 Journeyman League rules document publish by Privateer Press.  Now I am not sure why, but the way these leagues are setup for Mk3 seem overly simple and a bit counter intuitive in achieving what classically was the goal of a Journeyman League.

In the past, Journeyman Leagues were meant to provide an organized format to encourage players to build new or expand upon armies, while setting a easy to reach painting goal week to week.  This allowed players to focus on getting models painted in a 1 to 2 week time frame for each level while allowing them to play games while doing so. Usually players ended up with low to mid point armies with the option of 1 to 2 casters to chose from that were (and this is important) fully painted.

The 2017 Journeyman League requires player to add on additional models in 15pt increments each week , taking a starter box army of a just a few models to a full 75pt army in just 6 weeks.  That is a pretty big task if you ask me and Privateer Press though so too it seems.  Gone is the robust paint scoring system of Journeyman Leagues from the past and instead it is replaced by +1 win (effectively +1 point) towards obtaining a Destroyer point each week when you paint 1 or more models.  What motivation do players have to paint a whole army or even a full sized unit during the course of the league if they at most can get 1pt a week that might be meaningful, but likely not, during the course of the league.

Destroyer points are the silliest thing in my opinion.  At the end of each week the Event Organizer checks to see how many wins each player in the league has in the previous week.  Whoever has the most wins gets 1 Destroyer point.  The person at the end of the league with the most total Destroyer points wins the Destroyer award.  Yuck! Journeyman Leagues in the past had a robust system that rewarded players not just for winning games, but for playing games at different point levels and against different opponents.

So the first change we made was the paint scoring system for the Creator award.  The old system that I thought was pretty good ended up being too complex for some players to track easily.  In the end we kept it simple (stupid!). Players receive:

Simple, easy, basic.  Players also receive 1 bonus point per box of models or blister purchased for their army during the course of the league... to encourage players to support the store.

Second, we changed the Destroyer scoring system to award players more points depending on the size of game that was being played.

We are still using the Destroyer point system, but the score to decide who gets the Destroyer point each week is based on the total number of games played with +1 bonus point for each game won.  Total points scored during all 6 weeks is also used as part of a players score for the new Best Overall award that we added for this league.

As mentioned above, we added a new award to this league, Best Overall, that adds the total points scored for Destroyer and Creator together to decide the winner. If needed, the tie breaker is based on which player received the most votes for Best Sportsman (Favorite Opponent).  This will hopefully encourage players to play more game and keep coming in during the later weeks of the league. We have noticed attendance in the final few weeks tended to dropped off in the previous 2 Journeyman Leagues from 2017.

Finally we did something a bit radical. This will be the 6th Journeyman League my local LGS has run since the release of Mk3.  Many of our players can't afford to start new factions regularly and the skill levels and even the style of play our core group of players are looking for can very widely player to player. To address this, instead of forcing players to play the same old battlebox again we changed things up and allowed players to create there own starter boxes.  At first we used a list of 3 alternate Warcaster or Warlocks from each faction that players who had played in at least one previous Journeyman League at our store could pick from.  But then, after the cries for more competitive options out of the gate came in we decide to try something different.

Players who had played in a previous Journeyman League were allowed to build 2 lists instead of the normal 1 for the Journeyman League.  The first list had to use the normal battlebox or one of the suggested list from the 2017 Journeyman League rules for their chosen faction that did not have a dedicated battlebox.  For the other list, players could chose any Warcaster or Warlock available to their chose faction and build a starter box around them.

The only limitations were that they could not included character warjacks or character warbeasts in their starting battle group, and their battle group could not total to less points then 5 less then their chosen Warcaster or Warlocks dedicated warjack or warbeast points. When playing games, players were required to use list 1 when playing against new players or players that chose to only run 1 list during the league.  But if their opponent also had taken the option of building a second list, then each player had a choice of which list they wanted to play after learning what faction their opponent was playing... just like in a Steamroller Tournament.

This system has developed over the last 5 Journeyman Leagues run over the last 1.5 years since Mk3's release.  It works for us.  If you think it might work for you... or some part of it might... then please feel free to try it out for yourselves.

Okay guys and gals I have officially finished my first 2 models of 2018.  Here they are, a Gorehound and a Frightmare, both Warbeasts from the new-ish Grymkin faction from Privateer Press's game Hordes. 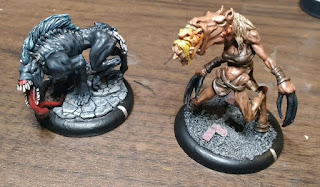 Warmachine and Hordes has been my primary game for the last few years and since Mk3 was released in the summer of 2016 I have only played models from Warmachine factions (Cygnar, Khador, Cryx and Menoth respectively).  One of the things I want to do in 2018 is play more Hordes, which thanks to a sweet Black Friday deal that let me pickup the Grymkin starter box for 50% of the retail cost, I am able to do.  Add in that there is a Journeyman League kicking off at my local LGS this coming Tuesday (which I am running, more on that soon), the models for the next CID release I am interested in do not release until March/April, and it seemed like the perfect time to jump right in and get a list or three painted up.

More pics, hobby info, cooking experiments (I have a new Fondue Pot I need to break in soon), and other bits and bobs from my life coming soon.

Blogs that Inspire Me